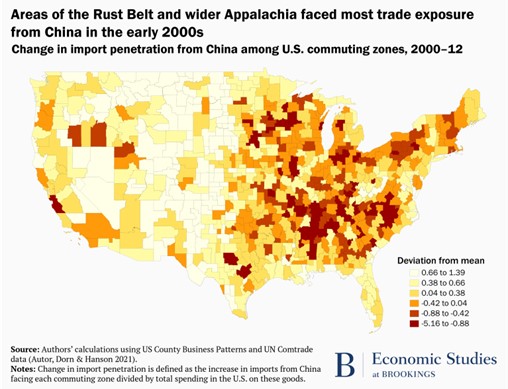 Editor's Note: The paper summarized here is part of the fall 2021 edition of the Brookings Papers on Economic Activity, the leading conference series and journal in economics for timely, cutting-edge research about real-world policy issues. Research findings are presented in a clear and accessible style to maximize their impact on economic understanding and policymaking. The editors are Brookings Nonresident Senior Fellow and Northwestern University Professor of Economics Janice Eberly and Brookings Nonresident Senior Fellow and Harvard University Professor of Economics James Stock. See the fall 2021 BPEA event page to watch paper presentations and read summaries of all the papers from this edition. Submit a proposal to present at a future BPEA conference here. A surge in imports from China as it modernized its economy during the 1990s and early 2000s caused job and income losses in U.S. manufacturing communities that persisted for years after the import shock plateaued around 2010, finds a paper to be discussed at the Brookings Papers on Economic Activity (BPEA) conference on September 9. China’s manufacturing exports rose starting in 1992 as it began transforming from a centrally planned to a comparatively market-oriented economy and shot up after it joined the World Trade Organization in 2001, write the authors—David Autor of the Massachusetts Institute of Technology, David Dorn of the University of Zurich, and Gordon Hanson of the Harvard Kennedy School. The overall benefits to the U.S. economy (such as lower-priced consumer goods) were positive but small, they write in On the persistence of the China shock. However, U.S. communities producing goods competing with Chinese exports, such as furniture and textiles, suffered painful and long-lasting economic scarring and social problems. “Labor markets more exposed to import competition from China experienced more plant closures; larger declines in manufacturing employment, employment-population ratios, earnings for low-wage workers, housing prices, and tax revenues; and larger increases in childhood and adult poverty, single-parenthood, and mortality related to drug and alcohol use,” they write. Until recently, the prevailing view among many economists has been that workers who lost jobs from trade competition would move to labor markets with industries less exposed to trade. That might depress wages in those areas, but the effect of the trade shock would be diffuse. However, the authors found that the China trade shock generated only modest migration from affected areas, mostly by foreign-born workers and younger native-born adults (ages 25-39). They looked at manufacturing employment in areas exposed to import competition from 2001 to 2019. They found that effect of the trade shock was concentrated in labor markets with below-average levels of college-educated workers and above-average shares of industries specializing in producing goods competing with imports from China. The effects grew increasingly negative until 2013, and then persisted through at least 2018, when their data end. Some displaced workers benefited from the Labor Department’s Trade Adjustment Assistance (TAA) program, but overall its effect on per capita income in trade-exposed areas was “vanishingly small,” the authors write. The Trump administration’s trade war with China appears to have succeed in raising the prices of U.S.-made goods but not in expanding employment in the industries receiving import protection, they write. “Presumably, job loss is equally scarring, no matter whether the underlying cause of displacement is import competition or technological change,” the authors note. Instead of protectionist measures such as tariffs or nationally uniform assistance such as the TAA, they observe that “fostering employment growth in regions beset by chronic joblessness”—whether from import competition or other causes—“may be the most comprehensive way to help workers facing persistent negative local labor demand shocks.” Hanson, in an interview with The Brookings Institution, said place-based policies could take the form of increased unemployment insurance payments or an increased earned income tax credit in labor markets hit by shocks, as well as regionally tailored training programs for displaced workers and assistance and consulting for remaining employers. “Nothing in our paper challenges the idea that free trade raises gross domestic product,” he said. “The question is what public policies do we want in place to ensure freer trade doesn’t generate concentrated pockets of hardship.” Citation Autor, David, David Dorn, and Gordon Hanson. 2021. “On the persistence of the China shock.” BPEA Conference Draft, Fall. Conflict of Interest Disclosure The authors did not receive financial support from any firm or person for this article or from any firm or person with a financial or political interest in this article. David Autor is on the Board of Economic Advisors for the Congressional Budget Office and the Advisory Board of the Opportunity & Inclusive Growth Institute at the Federal Reserve Bank of Minneapolis. Other than the aforementioned, they are currently not an officer, director, or board member of any organization with an interest in this article.