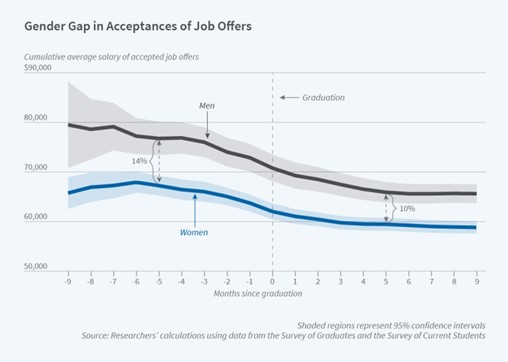 This week in Class Notes: This week’s top chart shows that the gender pay gap for business majors is driven in part by the greater risk tolerance of men. Michael Strain argues for a focus on expanding the supply of child care rather than subsidizing demand, in this week’s choice op-ed. Black family networks play a vital role in the exchange of emotional, financial, and caregiving support. While previous research has focused on differences between Black and white families, Robert Joseph Taylor and his colleagues look at the reasons for variation among Black families. Using nationally representative data from the African-American sub-sample of the National Survey of American Life, they find that women and younger adults are most likely to provide and receive support within extended family networks. Younger Black women therefore serve as crucial pillars in their families, due to their high levels of involvement within their family networks, as well as within the labor force. Younger adult children are often the primary caregivers to their older parents, which means that older adults without children often lack social support, along with ex-prisoners and military veterans. M.V. Lee Badgett, Christopher S. Carpenter, and Dario Sansone summarize recent research on LGBTQ economic characteristics and family structures. Notably, those who identify as gay or lesbian are more educated and less likely to be married or to have children, compared to those who identify as straight or bisexual. However, lesbian women were four times more likely than gay men to have children in their household (20% versus 5%). Using data from the American Community Survey, the authors find that the previously high wage premium for lesbians (20% in 1990) had virtually disappeared by 2018. Lesbian couples also have the lowest family income among all couple types, because of a double gender pay gap. The field of LGBTQ economics is of course very new, with sparse data and many questions needing to be answered – including the outcomes for transgender individuals, and how LGBTQ people of color fare in the labor market. As the authors conclude, “there are numerous research opportunities for health economists, public economists, development economists, economic historians, and macroeconomists to contribute their expertise to research questions addressing this important population.” As the share of immigrant students in U.S. schools increases, how does this affect outcomes, both for native and foreign-born students? Jason Fletcher and his fellow authors use a quasi-experimental design that exploits within-school, across-grade variation to assess the academic or social effects of attending a school with more foreign-born students. With data from the National Longitudinal Study of Adolescent Health, they find no statistically significant impact on U.S.-born students in any domain. The picture for foreign born students was mixed, however. Relative to native students, they saw improvements in social acceptance, mental health, risky health behavior, and academic effort. But there was a downward impact on vocabulary scores, which translated into fewer years of schooling long-term. Perhaps surprisingly, these negative effects did not appear to influence socioeconomic outcomes in adulthood. Most of these effects seem to be explained by stronger friendship networks among foreign-born students. This week’s top chart shows the gender gap for business studies college majors, over the period of job search before and after graduation. Men earned more on average, in part because of their willingness to hold out for a higher-paying job offer. But many men were also victims of overconfidence, ending up with a lower wage than a previous offer. “Instead of subsidizing demand [for child care], Congress should try to boost the supply of providers. This would reduce — not raise — the cost of care,” writes Michael R. Strain. “One way to do this would be to reduce regulation around child-staff ratios… Other regulations to consider are minimum qualifications for workers and size limits on classrooms. Another way… is to make sure that any subsidies can be used to compensate grandparents, aunts and uncles, neighbors and other care providers in informal networks. The focus shouldn’t exclusively be on getting more kids into commercial centers.” Gary Burtless and Isabel V. Sawhill propose some policies to improve the fortunes of America’s working class. A primary goal is to maintain a tight labor market in order to maximize employment and lengthen economic expansions. This could be done with more robust automatic stabilizers, including refinancing state unemployment insurance funding, and increasing the matching funds rate for federal-state medical and social service programs during recessions. Policies that strengthen workers’ bargaining power – for example through higher rates of union membership or training – can benefit workers and their employers. Finally, more generous wage subsidies, gradual increases to the minimum wage, and increased fringe benefits financed by a payroll tax on workers are all viable ways to boost working-class incomes. For your calendar: Virtual events on systemic racism and health outcomes, high-quality college programming in prisons, and direct philanthropic cash assistance amid COVID-19 Thursday, September 9, 2021 2:00 PM – 4:30 PM EDT U.S. Federal Reserve System Monday, September 13, 2021 3:00 PM – 4:30 PM EDT Urban Institute Thursday, September 16, 2021 2:00 PM – 3:30 PM EDT RAND Corporation