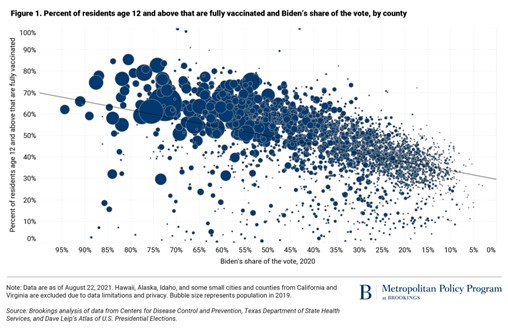 The impacts of the COVID-19 pandemic have been felt in a lot of different ways. Lower-wage workers have suffered far greater employment losses than high-wage workers, with employment slower to recover, as the W.E. Upjohn Institute found. Permanent job losses among Black workers have been almost twice those of white workers. Mothers have seen a much sharper decline in their labor force participation rate than fathers. Beyond that, the COVID-19 disaster has hit geographies in divergent ways, though the causal effects have been variable and sometimes hard to sort out. For example, regions dependent on tourism and areas dependent on global supply chains—such as manufacturing and production centers in the industrial Midwest—have been disproportionately slammed. Initially, large global city regions struggled while lower-density suburb, exurban, and rural areas experienced less illness. Later, new viral hotspots emerged in the South, West, and rural areas, where strict lockdown and masking measures were less common. Now, the latest phase of the pandemic—with vaccines widely available but significant vaccine hesitancy and denialism in the face of the Delta variant—is tracing its own geography. And it is following and exacerbating the same intractable red-blue divide that has organized so much strife in America in recent years. Since 2016, we have been analyzing the sharp divides in U.S. economic variables—whether they track output, employment, income, population density, or education levels—across the stubborn gap between “red” areas that voted for President Donald Trump and “blue” ones that have been voting Democratic. Now, as we explained to Bloomberg Businessweek last month, vaccine rates—a critical influence on economic recovery and growth—need to be added to that list of divides, as they will likely delay a return to normal in “red” communities. Examining information on the local share of fully vaccinated people age 12 and above, county by county, we found that the vaccination rate in counties that voted for Joe Biden in 2020 was 61% late last month. In Trump-voting counties, by contrast, the vaccination rate was just 47%—a gap that has widened substantially since April. That means that the vaccine divide—now aligned with the red-blue divide—will likely exacerbate the other economic divides that are already weakening the nation. Whereas the more heavily vaccinated blue counties will be better able to withstand the economic effects of the Delta variant, red communities will likely struggle as the virus keeps frustrated shoppers, travelers, and workers at home. In sum, as unvaccinated communities—nurtured by the politization of the pandemic response—resist safety precautions, their lagging economies could fall further behind faster-recovering “blue” communities. This dynamic will likely serve to exacerbate the polarization of American society and stoke red county resentments of better-off, healthier blue county elites. As a result, the challenge of pulling our country together is greater than ever.